Maximum Medical Improvement or MMI. What does it mean?

I've mentioned MMI generally in past postings, but I don't think I've ever defined it for anyone reading my blog.

The New Mexico Workers' Compensation Act defines MMI as the “date after which further recovery from or lasting improvement to an injury can no longer be reasonably anticipated based upon reasonable medical probability as determined by a health care provider defined in Subsection C, E or G of Section 52-4-1 NMSA 1978.” § 52-1-24.1.

In regular language, MMI is the time when a worker's injury stabilizes and recovery has leveled off or plateaued. Unfortunately, it usually doesn't mean a full or complete recovery. Most injured workers at MMI still have some symptoms, complaints, and/or disabilities from the work accident.

Money benefits and medical treatment usually are reduced or terminated at MMI. This reflects the fact that the injured worker's recovery has leveled off.

In a lot of workers' compensation cases, MMI is when injured workers try to return to work.

I usually discourage my clients from asking their doctors about MMI because sometimes doctors interpret the questions as a request to place the worker at MMI. Generally, a premature MMI date does not help the injured worker because it reduces money and medical benefits. I usually tell my clients to focus on their treatment and doing whatever else they can to increase their chances of returning to work in the future. Most doctors who treat injured workers know about MMI and will address it when the time is right.

The lesson here is that MMI is coming and it will, in most cases, reduce your money and medical benefits. In some cases, one or both may stop. The other lesson is to be prepared for MMI and the reduction in benefits before you hit MMI.

On another note, COVID19 is still with us. If you're working, great. But, please be aware that if you are working you're at risk for getting the virus and need to follow all of the precautions to avoid infection. If you think you've been infected at work, please make sure you tell your employer immediately and then contact an attorney. I am reviewing COVID19 cases.

As always, do what you can to be kind to others in this stressful time of COVID19. We can only get through this if we support each other as much as we can.

I took this during one of our recent smoky days. Smoke is annoying and dangerous, but it makes for some great sunsets. Stay safe. 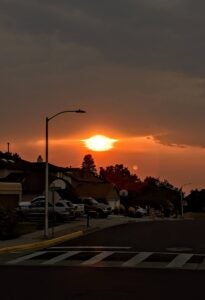 “One of the most experienced workers' compensation attorneys in New Mexico.” After graduating from high school in New York, I attended the College of William & Mary on an ROTC scholarship and earned a degree in Spanish. I served four years in the United States Army as an infantry lieutenant.

Thank you for contacting us. We will get back to you shortly.

Please complete all required fields below.

I offer a free consultation and I'll gladly discuss your case with you at your convenience. Contact me today to schedule an appointment.