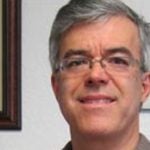 “One of the most experienced workers' compensation attorneys in New Mexico.”

After graduating from high school in New York, I attended the College of William & Mary on an ROTC scholarship and earned a degree in Spanish. I served four years in the United States Army as an infantry lieutenant, first at Ft. Benning GA and then at Ft. Ord, CA.

I moved to New Mexico in 1987 and began working on a master's degree in Latin American Studies at the University of New Mexico. The next year I started at the law school and graduated in 1991 with a joint law degree and MA.

From 1991 to 1992 I worked as a law clerk for Justice Seth Montgomery at the New Mexico Supreme Court. I then joined the Sager Law Firm and represented employers in workers' compensation cases.

Alan Malott (now Judge Malott) hired me about two years later. I began my work as a plaintiffs' lawyer at that time. In 1995, I opened my own office. About six years ago, my wife, Kris, and I decided to join forces as Bogardus & Scott, Attorneys at Law, P.C.

One of my main goals is to help people injured at work and injured by the negligence of others. I also represent employees who have suffered discrimination at work, been wrongfully terminated or who have not been paid for the work they did.

I am active at the New Mexico Legislature on issues affecting injured workers.

I am a member of the New Mexico Trial Lawyers Association.

I enjoy backpacking, road and mountain biking, rock climbing and eating good food and drinking good beer. I am the Scoutmaster of Troop 29, although I plan on stepping down sometime in the summer of 2014. I am very proud to say that my youngest son, Alex, became an Eagle Scout in May 2014.

Kris and I have three adult children, besides Alex, who, unfortunately, do not live in Albuquerque, but are all happy and successful.

Thank you for contacting us. We will get back to you shortly.

Please complete all required fields below.

I offer a free consultation and I'll gladly discuss your case with you at your convenience. Contact me today to schedule an appointment.